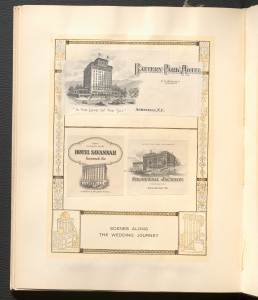 Three pasted in photos of hotels from Jeanette Stoffregen’s wedding journey. The top photo is of Battery Park Hotel, in Asheville, North Carolina, titled “In the Land of the Sky.” The middle two photos are of the Hotel Savannah in Savannah, Georgia, titled “Radio in Every Room,” and of the Hotel Stonewall Jackson in Staunton, Virginia titled “After Five Days Return To.” The bottom caption reads “Scenes Along the Wedding Journey.”