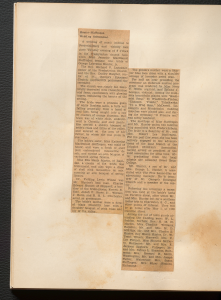 One newspaper article split into two sections taped to a scrapbook page. The newspaper articles are cut into two long rectangles and placed staggered side-by-side. The newspaper describes the wedding between Jeanette Stoffregen and George Hunter Jr. as one of “much interest to Fredericksburg and vicinity.” The article describes Jeanette’s dress, the significance of both families to Fredericksburg, details of the ceremony, and wedding attendees.
It reads “Hunter-Stoffregen
Wedding Solemnized
A wedding of much interest to Fredericksburg and vicinity took place Tuesday evening at 3 o’clock in the Presbyterian church here, when Miss Jeanette MacDonald Stoffregen became the bride of George Lawrence Hunter, jr.
The Rev. Richard V. Lancaster, pastor of the Presbyterian Church, and the Rev. Dudley Boogher, rector of St. George’s Episcopal Church, impressively performed the ceremony.
The church was simply but beautifully decorated with rhododendron and ferns, candlelabra with glowing tapers, enhancing the beauty of the setting.
The bride wore a princess gown of white Duchess satin, a tulle veil falling gracefully from a band of real lace, being caught into a cap by clusters of orange blossoms. Her train was of white satin, embroidered in Chenille and seed pearls. She carried a shower bouquet of bride’s roses and Lillies of the valley, and entered on the arm of her father, by whom she was given in marriage.
The bride’s sister, Miss Katherine MacDonald Stoffregen, was maid of honor, and wore a frock of shell pink embroidered mousseline de soir, and carried an arm bouquet of variegated spring flowers.
Miss Ella Healy Martin, of Rapidan, a cousin of the bride, was bridesmaid, and also wore a dress of shell pink mousseline de soir, carrying an arm bouquet of spring flowers.
Dr. Fielding Lewis Wilson was Mr. Hunter’s best man, Charles Edward Hunter, of Hopewell, a brother of the bride-groom, Everett S. Cole, Josiah P. Rowe, jr., William J. Rowe, and R. H. L. Chichester, acted as groomsmen.
The bride’s mother wore a dress of black Chantilly lace with a shoulder bouquet of pink roses and lily of the valley.
The groom’s mother wore a Skipper blue lace dress with a shoulder corsage of lavender sweet peas.
For half an hour preceding the ceremony an elaborate musical program was rendered by Miss Nora C. Willis, organist, and Roland J. Levenque, violinist. Among the numbers beautifully played were ‘Kashmirl Song,’ by Woodforde-Finden; ‘Chanson Trieste,’ Tshaikwsky; ‘To a Wild Rose,’ McDowell. Lohengrin and Mendelsohn wedding marches were played also, and during the ceremony ‘O Promise me,’ was softly rendered.
The marriage of Miss Stoffregen and Mr. Hunter unites two families long associated with Fredericksburg. The bride is a daughter of Mr. and Mrs. Robert Lee Stoffregen. For the past five years she has been acitively engaged in the advancement of the local branch of the Crippled Children’s Association, having served as president of the local association for some time. After graduating from the local schools she attended Sweet Briar College.
Mr. Hunter, a son of Mr. and Mrs. George L. Hunter, is associated with The Free Lance-Star as advertising manager. He is treasurer of St. George’s Episcopal Church and a member of the vestry.
Following the ceremony a reception was held at the bride’s home on Caroline street, after which Mr. and Mrs. Hunter left for a southern motor trip to Charleston, S.C., and other points of interest. They will be at home after May 1, at 1100 Caroline street.
Among the out of town guests attending the wedding were: W. L. Seddon, Norfolk: Rev. H. M. D. Martin, Miss Charline Williams, Rapidan; Mr. and Mrs. M. D. Aldridge, Mr. and Mrs. Charles E. Hunter, Roy Mason Hunter, Dr. W. Trent Wilson, Hopewell; Mrs. C. Lee Follmer, Miss Blanche McCarty, Baltimore; Mr. and Mrs. E. Jackson Eggborn, Culpeper; Mr. and Mrs. Sidney L. Shannon, Richmond; Mrs. Everard H. Smith, Washington; Mr. and Mrs. Joseph Parker, Waterview; Mrs. Susan Stoffregen, Mrs. Edgar Hoskins, Richmond;”