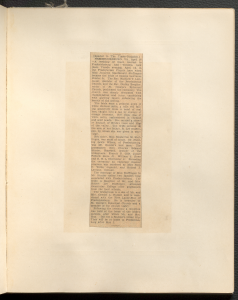 An identical newspaper clipping from an earlier photo “Hunter-Stoffregen Wedding Solemnized” shared with the Richmond Times-Dispatch newspaper. This clipping describes details of the Hunter-Stoffregen wedding.
This clip reads “[Special to The Times-Dispatch.] FREDERICKSBURG, VA., April 16
—A wedding of much interest to Fredericksburg and Virginia took place Tuesda evening, April 14, in the Presbyterian Church here when Miss Jeanette MacDonald Stoffregen became the bride of George Lawrence Hunter Jr. The Rev. Richard V. Lancaster, minister of the Presbyterian Church, and the Rev. Dudley Boogher, rector of St. George’s Episcopal Church, performed the ceremony. The church was simply decorated with rhododendron and ferns, candelabra with glowing tapers enhancing the beauty of the setting.
The bride wore a princess gown of white duchess satin, a tulle veil falling gracefully from a band of real lace, caught into a cap by clusters of orange blossoms. Her train was of white satin, embroidered in chenille and seed pearls. She carried a shower bouquet of Bride’s roses and lilies of the valley. The bride entered on the arm of her father, R. Lee Stoffregen, by whom she was given in marriage.
Her sister, Miss Katherine M. Stoffregen, was maid of honor, Dr. Fielding Lewis Wilson, of Fredericksburg, was Mr. Hunter’s best man. The groomsmen were Charles Edward Hunter, Hopewell, brother of the bridegroom; Everett S. Cole, Josiah Pollard Rowe Jr., William J. Rowe and R. H. L. Chichester Jr. Preceding the ceremony an elaborate musical program was rendered by Miss Nora C. Willis, organist, and Roland J. Leveque, violinist.
The marriage of Miss Stoffregen to Mr. Hunter unites two families long associated with Fredericksburg. The bride, a daughter of Mr. and Mrs. Robert Lee Stoffregen, attended Sweetbriar College after graduation from the local schools.
The bridegroom is a son of Mr. and Mrs. George L. Hunter and is associated with the Free Lance-Star of Fredericksburg. He is treasurer of St. George’s Episcopal Church and a member of the church vestry.
Following the ceremony a reception was held at the home of the bride’s parents, after which Mr. and Mrs. Hun left for a Southern bridal trip. They will be at home in Fredericksburg after May 1.”