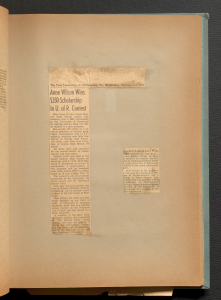 Newspaper clippings describing Anne Martin Wilson winning a $350 scholarship in the U. of R. Contest on February 18, 1953.
The left clip reads “The Free Lance-Star, Fredericksburg, Va., Wednesday, February 18, 1953
Anne Wilson Wins $350 Scholarship In U. of R. Contest
Miss Anne Wilson, James Monroe High School senior, this morning won a $350 scholarship to the University of Richmond by beating seniors from two other schools in a quiz program.
She scored 135 points on a series of questions on history, geography, mathematics and other subjects, winning over Miss Sue McCoy, of Orange High School, 110 points, and Miss Lula Christian, of Louisa High School, 75 points.
All three girls had qualified for the contest earlier by examinations and interviews.
Today’s event was held at the James Monroe High School auditorium, with U. of R. Dean Raymond B. Pinchbeck as master of ceremonies. A transcription of the program will be broadcast over radio station WRVA at Richmond at 10 a.m. Friday, Feb. 27.
The contest is one of a number sponsored by the university, the radio station and the Richmond Rotary Club.
Last year the area contest was won by Robert Goolrick, of Fredericksburg now a pre-law honor student at the University of Richmond.
Miss Wilson, 18, while not definitely decided on her field of study, is interested in religious education work. She is a Sunday school teacher at the Presbyterian Church and has served as a camp counselor.
A member of the Beta Club, scholastic society, she is co-editor of ‘The Monroe Echo,’ school annual. Last year she won an ‘I Speak for Democracy’ contest and has taken part in dramatics. She is the daughter of Dr. and Mrs. Fielding L. Wilson.”
Right side: “Fredericksburg Girl Wins
RICHMOND, Va. Feb. 28 (p) — Anne Martin Wilson of Fredericksburg has become the first girl to reach the semifinal round of the University of Richmond WRVA $7,000 radio scholarship quiz.
Miss Wilson is the daughter of Dr. and Mrs. Fielding L. Wilson of Fredericksburg and a senior at James Monroe High School. She was awarded a $350 scholarship to Westhampton College, women’s undergraduate division of the University of Richmond, and a place in the semifinal round.”