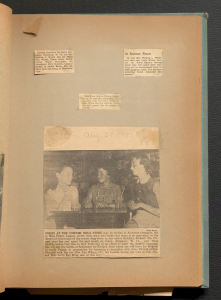 Newspaper clippings of Anne Martin Wilson (on the lefthand side of the photo), Pirkko Alakari (from Helsinki, Finland), and Betty Fay King (also from Fredericksburg, Virginia). These clippings are dated from August 27, 1951.

The top middle clipping reads: “Miss Anne Martin Wilson, daughter of Dr. and Mrs. Fielding L. Wilson, left today for Camp Alleghany, near White Sulphur Springs, where she will remain for the month of August.

The top right clipping reads: “At Summer Resort – Dr. and Mrs. Fielding L. Wilson and their son, Lewis Wilson, have left for White Sulphur Springs where they will spend some time. They will be accompanied home by their daughter, Anne, who has been attending Camp Alleghany all summer.

The bottom clipping with a photograph reads: “Cokes at the Corner Drug Store may be routine to American teenagers, but to Miss Pirkko Alakari, center, they are a rare treat – for there is no equivalent to the American institution of the corner drug store in her native Helsinki, Finland. The Finnish miss has just spent the past month at Camp Allgeghany, W. Va., and three months before that time in New York City in an effort to learn the English language. She will sail the middle of September for Finland from where she will leave for Belgium to study French in preparation of becoming a stewardess with Aero, Finnish airline. Pictured with her are Miss Ann Wilson, left, her hostess during her visit in this city, and Miss Betty Fay King, also of this city.